The recent national and local elections have placed a focus on providing policies that support economic opportunity for the lower- and middle-income rungs of the household income ladder. With growing populist movements on the left and right, arguments in support of socialism and some sort of "stakeholder capitalism" and "America First" trade policy have become prominent. The traditional view of laissez faire capitalism has come under withering attack. Of course, these foundational debates are occurring in the midst of a global pandemic, where small businesses and broader employment rates have been adversely impacted.

As we look toward a "post-COVID era, "how should policymakers be thinking about "getting America back to work?"

Join Pepperdine School of Public Policy (SPP) dean Pete Peterson, and noted business leader and SPP Senior Fellow, Andy Puzder, to discuss the economic lessons we've learned from the last couple years and how we can best respond in the months and years ahead.

This is intended to be a "seminar class" format with optional pre-reading sent to all registrants prior to the event. 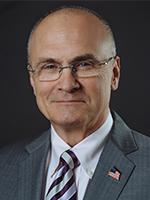 Andrew Puzder is the former chief executive of CKE Restaurants, where he helped turn Hardee's and Carl's Jr. into globally known fast food powerhouses. Starting as founder Carl Karcher's personal attorney in 1986, Puzder became CEO in 2000 and led the company out of serious financial difficulties. Under his leadership, CKE expanded to over 3,800 restaurants.

Puzder is a frequent lecturer on economics and politics for various groups and associations as well as at colleges and universities. In addition to serving as a senior fellow at the Pepperdine School of Public Policy, he is a director at The Job Creators Network and on the Advisory Board at Prager University. Puzder is a prolific author, contributor and thought leader on economic and legal issues in top tier media outlets such as The Washington Post, The Wall Street Journal, Fox News Opinion and CNBC, among others. In 2010, he co-authored the book titled Job Creation: How It Really Works and Why Government Doesn't Understand It. His second book, The Capitalist Comeback: The Trump Boom and the Left's Plot to Stop It, came out in April 2018.

You are invited to give a gift during the registration process which will go directly to your school's Student Relief and Recovery Fund. This fund ensures that our students continue to receive the instruction and support they need as they adapt to a new and rapidly changing educational reality.