For more information about this event, please email sppevents@pepperdine.edu or call 310.506.7490

Join the School of Public Policy for its annual Patricia Tagliaferri Dean's Distinguished Lecture Series with Victor Davis Hanson, award-winning historian and political commentator. Hanson will discuss his new book, The Case for Trump, where he explores how a celebrity businessman with no political or military experience triumphed over sixteen well-qualified Republican rivals, a Democrat with a quarter-billion-dollar war chest, and a hostile media and Washington establishment to become president of the United States.

The Patricia Tagliaferri Dean's Distinguished Lecture Series was established through an endowment for the School of Public Policy by benefactor Dr. Gus Tagliaferri. From its founding, the School of Public Policy has uniquely considered the role the Great Ideas play in shaping sustainable policy and great leaders.Trump saw a political opportunity in defending the working people of America's interior whom the coastal elite of both parties had come to scorn, Hanson argues. And Trump alone had the instincts and energy to pursue this opening to victory, dismantle a corrupt old order, and bring long-overdue policy changes at home and abroad. Hanson contends that while we could not survive a series of presidencies as volatile as Trump’s, after decades of drift, America needs the outsider Trump to do what normal politicians would not and could not do. 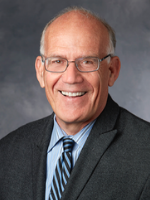 Victor Davis Hanson is the Martin and Illie Anderson Senior Fellow at the Hoover Institution and chairs the Military History Working Group. He is a military historian, columnist, former classics professor, and scholar of ancient warfare, and has been a commentator on modern warfare and contemporary politics for various media outlets. He was a professor of classics at California State University, Fresno, and has been a visiting professor at Hillsdale College since 2004. He received the Eric Breindel Award for Excellence in Opinion Journalism (2002), and was awarded the National Humanities Medal (2007) and the Bradley Prize (2008). Hanson is also a farmer and a critic of social trends related to farming and agrarianism and is author/editor of more than twenty-four books. His newest book is entitled The Case for Trump (Basic Books, March 2019).