"Pursuing Happiness in the Age of Trump"

"Pursuing Happiness in the Age of Trump"

Dr. Charles Murray's 2012 book, Coming Apart, is perceived today as prophetic in describing the societal conditions in which populist political movements could become successful. But almost 25 years ago, in the book he calls his favorite, In Pursuit of Happiness and Good Government, Murray outlines the conditions under which self-governing citizens can interact best with a limited, yet energetic, government. In this wide-ranging talk, Murray will explore whether happiness—rightly understood—can be achieved in a nation that is fracturing along class lines. 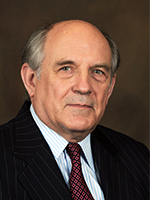 Murray is the W. H. Brady Scholar at the American Enterprise Institute. A political scientist, author, and libertarian, he first came to national attention in 1984 with the publication of Losing Ground, which has been credited as the intellectual foundation for the Welfare Reform Act of 1996. His 1994 New York Times bestseller, The Bell Curve (Free Press, 1994), coauthored with the late Richard J. Herrnstein, sparked heated controversy for its analysis of the role of IQ in shaping America's class structure. Murray's other books include What It Means to Be a Libertarian (1997), Human Accomplishment (2003), In Our Hands (2006), Real Education (2008), and the New York Times bestseller Coming Apart (2012). His most recent book, By the People: Rebuilding Liberty Without Permission (Crown Forum, 2015), urges Americans to stem governmental overreach and use America's unique civil society to put government back in its place. Murray holds a PhD in political science from the Massachusetts Institute of Technology and a BA in history from Harvard University.