Registration is required. Seating is limited.

The Augustus and Patricia Tagliaferri Dean's Distinguished Lecture Series was established through an endowment for the School of Public Policy by benefactor Dr. Augustus "Gus" Tagliaferri (MBA '74). From its founding, the
School of Public Policy has uniquely considered the role all the liberal arts play in shaping sustainable policy and great leaders. From the beginning of this unique lecture series, we have welcome historians, social scientists, and religious scholars to explore the many dimensions of American policy and politics.

With each passing day, the news seems to present us with another global "hotspot"—from Eastern Europe to the South Pacific to Sub-Saharan Africa. How do these challenges rank as issues Americans should be concerned about? Are there others we should be considering? Join us for this wide-ranging conversation with one of the country's top diplomats—former National Security Advisor, Robert C. O'Brien. 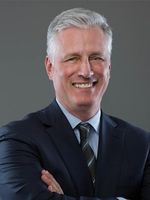 Robert C. O’Brien was the 27th United States National Security Advisor from 2019 – 2021. O’Brien served as the President’s principal advisor all aspects of American foreign policy and national security affairs. He is the co-founder and Chairman of American Global Strategies, LLC, a Washington, DC-based strategic advisory firm.

O’Brien brought a renewed focus to defense and industrial base issues to the NSC. A long-time advocate of a sea power and a 355 ship Navy, O’Brien visited leading shipyards during his tenure. He also spent time at defense plants and with our troops at bases around the world.

During O’Brien’s time as National Security Advisor, the United States orchestrated the historic Abraham Accords in the Middle East, brokered economic normalization between Serbia and Kosovo, achieved significant defense spending increases among our NATO allies and increased cooperation with America’s allies across the Indo-Pacific.

Prior to serving as NSA, O’Brien was the Special Presidential Envoy for Hostage Affairs with the personal rank of Ambassador. He was directly involved in the return of over 25 detainees and hostages to the United States. O’Brien previously served as Co-Chairman of the U.S. Department of State Public-Private Partnership for Justice Reform in Afghanistan under both Secretaries of State Rice and Clinton.

O’Brien was also a presidentially-appointed member of the U.S. Cultural Property Advisory Committee from 2008-2011. In 2005, O’Brien was nominated by President George W. Bush and unanimously confirmed by the U.S. Senate to serve as a U.S. Representative to the 60th session of the UN General Assembly. Earlier in his career, O’Brien served as a Senior Legal Officer for the UN Security Council commission that decided claims against Iraq arising out of the first Gulf War. He was a Major in the Judge Advocate General’s Corps of the U.S. Army Reserve.

O’Brien is partner emeritus at Larson LLP in Los Angeles, a nationally recognized litigation boutique that he co-founded in 2016. Over his career, he has served as counsel and arbitrator in dozens of International proceedings.

The National Museum of the Surface Navy named O’Brien the recipient of the 2021 Freedom of the Seas Award. That same year, O’Brien and former Secretary of State Mike Pompeo were awarded the Richard Nixon Foundation’s Architect of Peace Award for their work on the Abraham Accords and other initiatives while in office.  Following the signing of the Abraham Accords in 2020, a tree was planted on behalf of the State of Israel at the John F. Kennedy Memorial Forest in the Hills of Jerusalem in honor of O’Brien. In 2019, O’Brien received the Dr. Miriam and Sheldon Adelson Award for the Defense of America and Israel. The U.C. Berkeley School of Law presented O’Brien with the Stefan A. Riesenfeld Memorial Award for outstanding contributions to the field of international law in 2011.

In July 2022, O’Brien was elected as the Chairman of the Board of Directors of the Richard Nixon Foundation. He also serves as co-chair with Secretary Pompeo of The Nixon Seminar on Conservative Realism and National Security.