Faith and Reason: Are They Friends or Foes? | Pepperdine School of Public Policy Skip to main content

Faith and Reason: Are They Friends or Foes?

In an increasingly secularized era, is it possible for people of faith and our non-believing neighbors to understand one another as we deliberate over polarizing policy and political issues? Grounding his lecture in his important book, Conscience and Its Enemies (ISI, 2016), Dr. Robert George, Ronald Reagan Honorary Distinguished Professor at the Pepperdine School of Public Policy,  explores a variety of "hot button" topics in our public square to demonstrate that each can be discussed in a civil manner through the reasoning capacities we all possess. George brings in a diverse set of thinkers across human history to argue that even the issues that are considered to be at the center of some "Church/State" debate, can be thoroughly investigated through facts and reason. 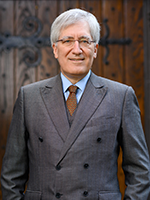 George is the McCormick Professor of Jurisprudence and director of the James Madison Program in American Ideals and Institutions at Princeton University and is a visiting professor at Harvard Law School. He has served as chair of the US Commission on International Religious Freedom and as a presidential appointee to the US Commission on Civil Rights. George has also served on the President's Council on Bioethics and as the US member of UNESCO's World Commission on the Ethics of Science and Technology. He was a judicial fellow at the Supreme Court of the United States, where he received the Justice Tom C. Clark Award.

A Phi Beta Kappa graduate of Swarthmore College, George holds degrees from Harvard University and Oxford University, in addition to 22 honorary degrees. He is a recipient of the US Presidential Citizens Medal, the Honorific Medal for the Defense of Human Rights of the Republic of Poland, and is a member of the Council on Foreign Relations. The University of Dallas and the American Enterprise Institute host the Robert P. George Initiative in Faith, Ethics, and Public Policy in Washington, D.C. His most recent book is Conscience and Its Enemies.

11 AM: Welcome and Opening Remarks