Hungary in the 21st Century: EU and Hungary

Join the School of Public Policy for a lunchtime conversation with Dr. Zoltán Kovács, Hungarian state secretary for international communication and relations. 16 years after joining the European Union and 13 years since becoming a part of the Schengen Area, questions haven arisen within Hungary—still very much a gateway to/from the East—on the balance between national sovereignty and the collective continental union. Kovács will explore Hungary's responsibilities as a member of the EU and the EU's responsibilities toward its member-states.

Light refreshments will be served. 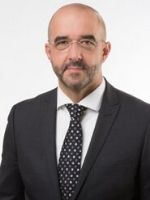