Join the Pepperdine School of Public Policy for its annual Charles and Rosemary Licata Lecture on March 18, 2019 featuring Elizabeth Spalding, associate professor of Government at Claremont McKenna College. Spalding will explore the relationship between a president's faith and their political decision making.

In the modern era, the relationship between a president's faith and politics has remained remarkably salient: Whatever their religious affiliation, a majority of Americans want their presidents to have faith as they execute the most exacting constitutional job; many presidents draw on their faith daily and in moments of crisis; and in wartime, faith may help inform a statesman's approach to conflict and its resolution. War is the ultimate test in politics and faith, in which a president must make frequent and challenging life-and-death decisions. In the case studies of Woodrow Wilson and World War I, Franklin D. Roosevelt and World War II, Ronald Reagan and the Cold War, and George W. Bush and the War on Terrorism, the presidents' respective religious faiths not only gave them courage and confidence but also influenced their political thinking, rhetoric, and policies about war and peace. These presidents' faiths informed and clarified their understanding of good and evil and aided their formulation of a political vision for their postwar worlds. These presidents, their wars, and their legacies have significantly shaped—and continue to shape—US foreign policy and America's role in the world. 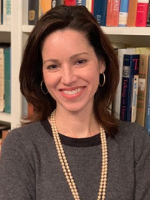 Elizabeth Spalding, associate professor of government at Claremont McKenna College, is the author of The First Cold Warrior: Harry Truman, Containment, and the Remaking of Liberal Internationalism and the co-author of A Brief History of the Cold War. She has contributed to several volumes on the presidency and US foreign policy, and her articles have been published in Orbis, The Wilson Quarterly, and The American Mind. She also serves on the Board of Trustees of the Victims of Communism Memorial Foundation in Washington, DC.