Join us to celebrate our annual Charles and Rosemary Licata Lecture, with "Rugged Individualism:  Dead or Alive?" with Dr. Gordon Lloyd, Senior Fellow at the Ashbrook Center and the Dockson Professor Emeritus of Public Policy at Pepperdine University. He will discuss his most recent book, coauthored with former Pepperdine president and Distinguished Professor of Public Policy David Davenport, currently a research fellow at the Hoover Institution at Stanford University. Lloyd will look at individualism not primarily through the lens of psychology or sociology, but also through a political context. He will analyze the history of American Individualism, from its earliest roots in religion during our colonial period up to the present day, including current debates over individualism versus Obamacare, federal education reform, and income inequality. 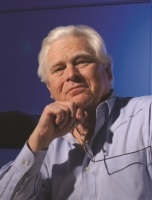 Dr. Gordon Lloyd is a Senior Fellow at the Ashbrook Center and the Dockson Professor Emeritus of Public Policy at Pepperdine University. He is coauthor of three books on the American founding and is editor of James Madison's Debates in the Federal Convention of 1787. He is the coauthor, with David Davenport, of The New Deal and Modern American Conservatism:  A Defining Rivalry and author-collaborator on three books on political economy. He is also the creator of four websites on the creation and ratification of the Constitution and the Bill of Rights. He is also serves on the National Advisory Council for the Walter and Leonore Annenberg Presidential Learning Center through the Ronald Reagan Presidential Foundation.