Delegate Madison and the Holy Grail

Dr. Gordon Lloyd will present his annual Constitution Day lecture as a reconsideration of James Madison's coverage of the Creation of the Constitution signed by 39 virtuous citizens. 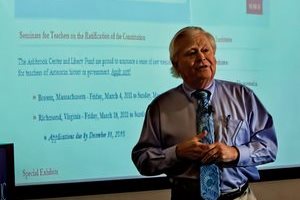 Lloyd is Professor Emeritus and Robert and Katheryn Dockson Professor of Public Policy at the Pepperdine School of Public Policy. He is the coauthor of three books on the American founding and sole author of a book on the political economy of the New Deal, he also has numerous articles, reviews, and opinion-editorials to his credit. His latest coauthored book, The New Deal & Modern American Conservatism: A Defining Rivalry, was published in 2013, and he most recently released as editor, Debates in the Federal Convention of 1787, in September 2014. He is the creator, with the help of the Ashbrook Center, of four highly regarded websites on the origin of the Constitution. He has received many teaching, scholarly, and leadership awards including admission to Phi Beta Kappa and the Howard White Award for Teaching Excellence at Pepperdine University. He currently serves on the National Advisory Council for the Walter and Leonore Annenberg Presidential Learning Center through the Ronald Reagan Presidential Foundation. Lloyd earned his bachelor of arts degree in economics and political science at McGill University. He completed all the course work toward a doctorate in economics at the University of Chicago before receiving his master of arts and PhD degrees in government at Claremont Graduate School.