The Illusion of Mastery 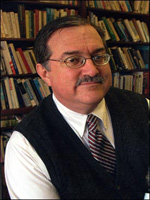 No aspiration of modernity has been more fundamental and more persistent than its desire to achieve mastery over the terms of human existence. Yet the record of the last century or more suggests that mastery is an ambivalent goal, one that does not always deliver on its promises, and does not necessarily conduce to greater human happiness. Wilfred McClay will explore the paradoxical character of our drive toward mastery, and how we should balance that impulse against other fundamental human goods.

Wilfred McClay is the 2009-2010 William E. Simon Distinguished Visiting Professor at the School of Public Policy. He is the SunTrust Bank Chair of Excellence in Humanities at the University of Tennessee at Chattanooga, where he is also professor of history, since 1999. He is Senior Scholar at the Woodrow Wilson International Center for Scholars in Washington, DC, Senior Fellow at the Ethics and Public Policy Center, and has served since 2002 on the National Council on the Humanities. Among his books is The Masterless: Self and Society in Modern America, which won the Merle Curti Award of the Organization of American Historians.

The William E. Simon Distinguished Visiting Professorship at the School of Public Policy is funded by the William E. Simon Foundation and the John M. Olin Foundation. The program gives the school the opportunity to invite a series of nationally recognized and highly respected individuals to be in residence each year. Each visiting professor leads a class or seminar, devotes significant time as a resident mentor to student scholars, and leads presentations for the entire campus community.