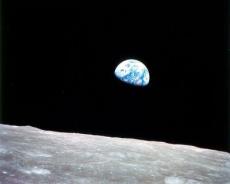 The Davenport Institute at the School of Public Policy will present a student-only screening of "In the Shadow of the Moon," the award winning documentary about the Apollo space program. Following the screening, all members of the Pepperdine community and the public are welcome to hear two prominent experts on space policy.

Student-only Screening of “In the Shadow of the Moon”
The award winning documentary about the Apollo space program.

2 PM
"Space Policy: The Past, Present, and Future"
Gil Klinger
Director of the Space and Intelligence Office for the Under Secretary of Defense for Acquisition, Technology, and Logistics

From the launch of the Soviet Union's Sputnick satellite in 1957, through the  Challenger and Columbia shuttle disasters, to the Chinese testing of an anti-satellite capability in 2007, U.S. Space Policy has reflected the leadership role we have chosen in space technology and exploration while ensuring space is an integral part of our national security posture. As technology and commercial enterprises have enabled more and more nations to become "space-faring", the United States is at a critical juncture in its policy. We must decide on a future vision, even as we balance our own national security interests with those of the commercial "business of space" in a constrained, competitive budget environment.