Genes and Free Will 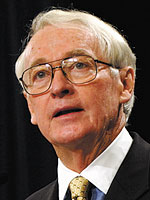 Science has made apparent advances in explaining human behavior, searching its origins in both genetic and environmental influences. But if science explains why we act as we do, can we be held accountable for how we act? In what sense are persons guilty unless there are choices to be made and free will to be exercised? Our assumptions about free will, and science's conclusions about choice, have a profound impact not only on how societies design policies to hold individuals responsible for their actions, but on the kinds of policies that are created to deal with a  broad array of challenges that we face.

James Q. Wilson is the Ronald Reagan Professor of Public Policy at Pepperdine and holds the nation's highest civilian honor, the Presidential Medal of Freedom.He has enjoyed an extraordinary career, including 25 years at Harvard University where he was the Shattuck Professor of Government. He was the James Collins Professor of Management and Public Policy at UCLA for a decade before his appointment at Pepperdine. The author or coauthor of more than 15 books including, The Marriage Problem: How Our Culture Has Weakened Families (Harper Collins, 2002), Moral Judgment (Perseus, 1997), andThe Moral Sense (Free Press, 1993). Others cover a wide variety of policy topics including urban problems, government regulation and bureaucracy, crime prevention, and delinquency among children.

In addition, Wilson has served as president of the American Political Science Association, which presented him with several prestigious awards honoring his lifetime of service. Professor Wilson was honored by the Lynde and Harry Bradley Foundation as a recipient of the 2007 Bradley Prize.