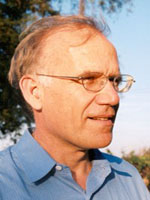 The School of Public Policy announces the appointment of Victor Davis Hanson as the Spring 2009 William E. Simon Distinguished Visiting Professor. During his residence, Hanson will lead the Seminar in International Relations: Global Rule of Western Civilization?

Hanson received a B.A. from the University of California, Santa Cruz, in 1975, attended the American School of Classical Studies, and received a Ph.D. in classics from Stanford University in 1980.

The William E. Simon Distinguished Visiting Professorship at the School of Public Policy is funded by the William E. Simon Foundation and the John M. Olin Foundation. The program gives the School the opportunity to invite a series of nationally recognized and highly respected individuals to be in residence each year. Each visiting professor leads a class or seminar, devotes significant time as a resident mentor to student scholars, and leads presentations for the entire campus community.