To say that academia is politically progressive is a generally accepted fact of American life. But for a graduate policy program tasked with preparing our next generation of public leaders, it is of primary importance that we practice viewpoint diversity both inside and outside the classroom. In today's polarized public square, leaders must know not only their own intellectual foundations, but also those with whom they disagree.

Unfortunately, on too many American college campuses, the perspectives expressed (and encouraged) range from left to . . . far left. National surveys continue to show that today's undergraduates - particularly conservative students and students of faith – feel they must squelch their political opinions out of fear of retribution from fellow students, faculty, and administrators. In a recent national survey by the Foundation for Individual Rights in Education found that almost half of self-described "Very Conservative" students said they refrained from expressing their political opinions in class because they "thought the professor would give me a lower grade" and more than 40 percent of "Conservative" and "Very Conservative" students said they withheld their opinions because they "thought that classmates would judge me."

We are Living in an "Eggshell Culture"

What this creates is what we call "eggshell cultures" on college campuses where students worry about saying the "wrong" thing at the wrong time to the wrong person. Our concern as a graduate policy program is that these "eggshell cultures" are spreading beyond the college boundaries and into the broader public square—contributing to the polarization and even violence in our politics.

Pepperdine as an Edenic Campus

In his important ground-breaking book, coauthored with Joshua Dunn, Passing on the Right: Conservative Professors in the Progressive University, Jon Shields examines these issues through over 150 interviews with mostly conservative professors at universities around the country. He finds many professors who relish their uniqueness in the workplace, while others having to hide their political views . . . at least until they earn tenure.

Notable, is that the name of every interviewee, and their affiliated college or university is kept confidential. At the beginning of the book's fifth chapter, the authors describe how their research began:

"Our first interviews brought us to a paradise for right-wing academics. Its edenic campus sprawls up a mountain just above a seaside town, where the ocean sweeps out of the horizon and dominates every vista . . . as we peered out over the mountains and blue waters we began to suspect that with the protected sanctuaries like this one, the plight of conservative academics could not be all bad."

I'm happy to disclose that the "edenic campus" depicted above is right here in Malibu at the Pepperdine School of Public Policy, and the first professors interviewed for the book were Robert Kaufman and Ted McAllister. Though far from "right-wing academics," these two thoughtful conservatives are representative of our broader faculty.

From our founding back in 1997 with faculty like James Q. Wilson, Congressman Jack Kemp, Michael Novak and Kevin Starr to today with full-time and visiting professors including Victor Davis Hanson, Karen House, Steven Hayward, and Wilfred "Bill" McClay, it is fair to say we are one of America's only center-right graduate schools.

Why is it Important?

What you'll hear our students say—both conservative and liberal, faith-inspired or not—is that Pepperdine School of Public Policy provides a welcoming and challenging environment to everyone. From our Ethical Dimensions of Public Policy: Great Books and Great Ideas coursework to invited speakers, our "City on a Hill" campus offers the unique opportunity to think critically about one's own perspective as well as others', producing leaders who are humble, collaborative and optimistic about the future.

Is the 'Eggshell Culture' on Campus Moving Into Our Public Square? 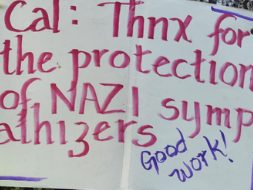 Why "Viewpoint Diversity" is so Important at SPP Blog