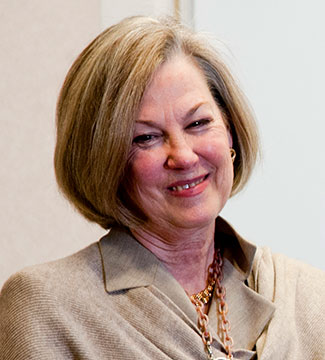 Karen Elliott House served as the publisher of The Wall Street Journal from 2002 until her retirement in 2006. She also held various roles throughout a 32-year career at Dow Jones & Company, most recently as senior vice president and a member of the company's executive committee. She is a broadly experienced business executive with particular knowledge and expertise in international affairs. Currently, House is an Adjunct Senior Fellow at the Belfer Center for Science and International Affairs at Harvard's Kennedy School of Government, as well as the author of On Saudi Arabia: Its People, Past, Religion, Fault Lines, and Future (Knopf, 2012).

As part of her career with Dow Jones, House served as foreign editor, diplomatic correspondent, and energy correspondent. Her journalism awards include a Pulitzer Prize for international reporting for coverage of the Middle East (1984), two Overseas Press Club awards for coverage of the Middle East and of Islam, and the Edwin M. Hood Award for Excellence in Diplomatic Reporting for a series on Saudi Arabia (1982). In both her news and business roles, House interviewed world leaders including, Saddam Hussein, Lee Kwan Yew, Vladimir Putin, Margaret Thatcher, Richard Nixon, George H. W. Bush, and Yasser Arafat, among many others.

House has appeared frequently on television over the past three decades including on Washington Week in Review, Meet the Press, and Face the Nation, and more recently has been featured on PBS, Fox, CNN, and CNBC as an expert on international relations.

House serves multiple nonprofit boards including the Rand Corporation, the Trilateral Commission, the Council on Foreign Relations, the Asia Society, the German-American Council, and Boston University, and is also a member of the advisory board of the College of Communication at the University of Texas.

House is a graduate of the University of Texas at Austin and has studied and taught at Harvard University's Institute of Politics. House holds honorary degrees from Boston University and Lafayette College and is a Fellow of the American Academy of Arts and Sciences. House also received the honorary Doctor of Laws degree from the Pepperdine University School of Public Policy in 2013.