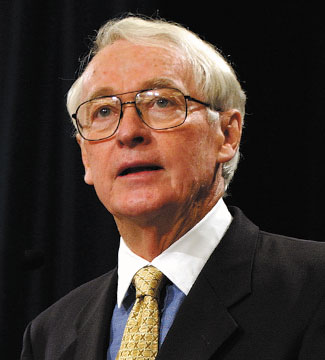 Dr. James Q. Wilson served as the Ronald Reagan Professor of Public Policy at the Pepperdine University School of Public Policy until his passing in March 2012. He enjoyed a long storied career in the public policy arena. From 1961 to 1987, he taught political science at Harvard University, where he was the Shattuck Professor of Government. He was the James Collins Professor of Management and Public Policy at UCLA from 1985 until 1997. He authored or coauthored 14 books, the most recent of which are The Marriage Problem: How Our Culture Has Weakened Families (Harper Collins, 2002), Moral Judgment (Basic Books), and the Moral Sense (Free Press). His others include American Government, Bureaucracy, Thinking About Crime, Varieties of Police Behavior, Political Organizations, and Crime and Human Nature (with Richard J. Herrnstein). In addition he edited or contributed to books on urban problems, government regulation of business, and the prevention of delinquency among children. Many of his writings on morality and human character have been collected in On Character: Essays by James Q. Wilson. His textbook on American government is more widely used on University campuses than any other government textbook.

Wilson served on a number of national commissions concerned with public policy. He was chairman of the White House Task Force on Crime in 1966, Chairman of the National Advisory Commission on Drug Abuse Prevention in 1972-1973, a member of the Attorney General's Task Force on Violent Crime in 1981, a member of the President's Foreign Intelligence Advisory Board from 1985 to 1991, and a member of the board of directors of the Police Foundation form 1971-1993. He was chairman of the Council of Academic Advisers of the American Enterprise Institute and served on the boards of State Farm Mutual Insurance Company and Protection One. He was a trustee of the RAND Corporation.

In 1990 the American Political Science Association presented him with the James Madison Award for a career of distinguished scholarship, and in 1991-1992 he served as the association's president. In 1994 he received the John Gaus Award for "exemplary scholarship in the fields of political science and public administration."

At the time of his appointment at Pepperdine, Wilson was the president of the American Political Science Association. The Association presented to Wilson a "Lifetime Achievement Award" in 2001.