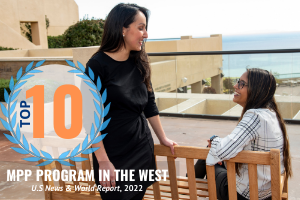 The Pepperdine School of Public Policy (SPP) ranked a top 10 program in the West among 275 policy programs in the just-released 2022 edition of Best Graduate Schools for Public Affairs by US News & World Report.

“I’m delighted to see SPP continue its high rankings in the West and in California, as we look to expand our presence and recognition nationally,” said Pete Peterson, the Braun Family Dean at the school. “Even in this ‘pandemic year,’ we’ve been aggressive in adding new programs and visiting faculty across an array of policy fields, and I’m excited about our plans for 2021,” he added.

Grounded in a distinctive curriculum, which balances coursework in American history and political economy with standard quantitative studies in policy analysis, SPP prepares public leaders who can work across differences and across sectors to create sustainable policy solutions. In 2020, SPP announced noted policy leader Kevin Faulconer, former mayor of San Diego, California, and candidate for California governor. to serve as the visiting professor of community leadership and government innovation. Just this year, the School announced the affiliation of philosopher and legal scholar Robert “Robby” George to serve as the Ronald Reagan Honorary Distinguished Professor of Public Policy. George's role includes an invitation to give academic lectures, lead student colloquia, and participate in speaking engagements with members of the Pepperdine community.

The School has launched recent initiatives in education policy and crisis management alongside its nationally-recognized Davenport Institute for Public Engagement & Civic Leadership, which continues to train and consult with hundreds of local government leaders from across the country in facilitating more effective and participatory public policymaking processes. As a founding member of the Public Interest Technology-University Network, the Institute has grown its coursework and training in the “smart city” movement. In 2020, it offered one of America’s first professional certifications in “Leading Smart Communities” for municipal government officials and will offer a new workshop in GIS skills for crisis managers in 2021.

Launched in early 2017, SPP’s American Project remains a unique academic effort to gather leading academics and policymakers to explore the prospects for a more communitarian approach to American policy and politics. In 2020 the “Project” began a webinar series titled the “Quest for Community,” which has featured panels with civic leaders, policy researchers, and political opinion writers. It continues to host an essay series on the website, RealClearPolicy.com.

SPP offers a two-year, full-time master of public policy program with its comprehensive James Q. Wilson Core curriculum grounded in both policy analysis and an exceptional understanding of the many factors—cultural, historical, philosophical, and faith perspectives—to employ what Dr. Wilson called our "moral sense." The need to humanize our politics and policymaking has never been greater, which is why we say from our breathtaking campus, our students "will see public policy differently from here." Through coursework and co-curricular events, SPP demonstrates its commitment to “viewpoint diversity,” which it views as an integral component to the preparation of leaders going into careers in policy and politics.

Offering joint degree programs in partnership with Pepperdine's top-ranked graduate schools for business, law, and dispute resolution, SPP also facilitates a 3-credit Washington, DC Policy Scholars Program during summer, on the topics of “American Gospel: The Role of Religion in US Domestic and Foreign Policy” and "Humanizing Education Policy: A Study of Foundational Philosophies."