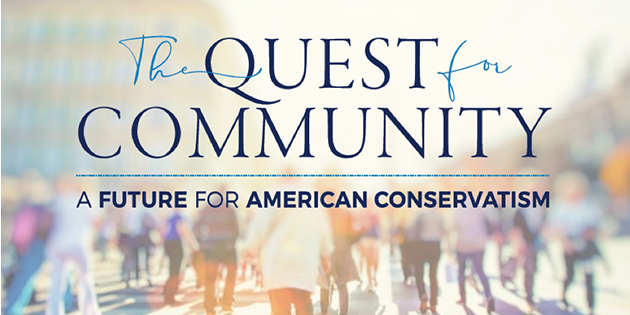 Join the American Project at the Pepperdine School of Public Policy on Thursday, October 15, 2020 at 9:30 AM PDT (12:30 PM EDT) for the fourth webinar in The Quest for Community webinar series, "American Identity Post 2020 Elections."

This webinar will focus on the question, "Is pride in our local community enough of an identity in America to offer an alternative to America's Left and Right tribal identity politics?" Panelists include Timothy P. Carney (American Enterprise Institute), Angela Sailor (Heritage Foundation), Rachel Barkley (Barkley Consulting), and John Wood, Jr. (Braver Angels).

In Carney’s breakthrough book on the 2016 election entitled, Alienated America: While Some Places Thrive While Others Collapse, he posits "Geography, more than we typically assume is destiny . . .  Strong communities function not only as safety nets . . . These are where we find our purpose."

Since Carney's study of the 2016 election, the COVID crisis has exacerbated what has been called "America's loneliness epidemic," the 2020 election has sharpened ideology differences, and the death of George Floyd and the rise of the Black Lives Matter movement have heightened tensions over racism and where we locate our sources of identity.

In response, both America's political Left and Right are increasingly defining themselves along the lines of group racial identity. On the Left, identity politics seeks to create a coalition of oppressed racial and gender groups and their allies into one coalition against perceiving oppressors on the Right. The Right has spoken of a white-identity politics based in US nationalism and ties to traditional Christianity. These two identities have become tribal and hyper-partisan leaving no room for debate and great potential for violent conflict. Is it possible that our geographic communities (and civic institutions within them) can moderate these forces and serve as "places of connection" in this polarized era?

In this panel, keynoted by Carney, panelists will engage these issues from a variety of perspectives from personal experiences to national survey research. Hosted on the Zoom platform, the event also welcomes audience participation.

This webinar seeks to explore the points of connections in America outside of identity politics as ways our nation can avoid the increasing polarization. To learn more about this event and to register, visit the event webpage here.