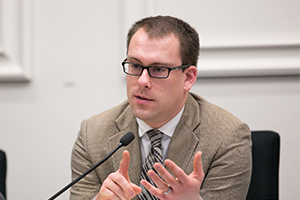 The Pepperdine School of Public Policy (SPP) is training the future leaders of our nation, and Washington State Senator Hans Zeiger (MPP '09) represents the very best of the impact SPP is making. Senator Zeiger completed his undergraduate studies at Hillsdale College, and chose to pursue his master of public policy at Pepperdine because of its unique approach to public policy education.

During his time at SPP, Zeiger was able to pursue an independent study focusing on the political history of his native Washington State. He noted, "this opportunity really gave me unique insights into the political culture and themes in my state. . . and prepared me in many ways to ultimately return and run for office."

"The program at SPP helped me to think in a structured way about public policy, and it gave me the tools to be an effective legislator," stated Zeiger. "Understanding the foundational aspects of our democracy, and having a framework for deliberation, are critical to making a meaningful impact as an elected official."

Zeiger was elected to the Washington House of Representatives in 2010, and was re-elected in 2012 and 2014. In 2016, he was elected to the Washington State Senate. Senator Zeiger serves as chair of the Senate Early Learning and K-12 Education Committee, where he is leading efforts to implement "full funding" of K-12 education in the state as part of a recent State Supreme Court ruling. He is also a member of the budget-writing Senate Ways & Means Committee and serves as vice chair of the Senate State Government Committee.

Pete Peterson, dean of the Pepperdine School of Public Policy noted, "We are incredibly proud to have Senator Zeiger on the front lines of the important issues facing Washington State--issues which many states and certainly our nation share in common. Hans is a perfect example of the importance of the School of Public Policy, and we know that he serves as an inspiration to current and future students who are considering public service."