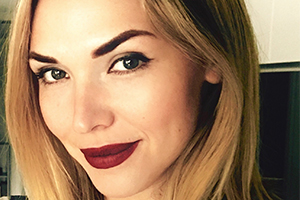 Kaitlyn Pfingston (MPP '18) is a rising second-year student at the School of Public Policy (SPP) who is completing her policy internship this summer at the Hoover Institution in Washington, DC. She received a BA in political science from the University of California, Berkeley, and is specializing in American Politics and International Relations at the School of Public Policy.

The policy internship is a required element toward graduation and is typically at an organization related to the student's specialization. The internship provides a perspective on how the methods and theories learned in the cases studied in the classroom may find practical expression in non-textbook and complex real-life settings.

Why did you choose the School of Public Policy at Pepperdine?
I can't speak highly enough about the curriculum. I haven't seen anything comparable in any of the universities that I've considered. As far as scholarship and faculty are concerned, I sought ideological diversity due to the overall level of sophistication and quality in education that it tends to produce. Unfortunately, at this point in time most colleges and universities have fallen into the black hole of orthodoxy and groupthink, which really just leads to wasted time and resources.

Pepperdine has done a remarkable job in distinguishing itself. Prior to applying to any graduate school, I did extensive research on both the courses offered and the prior work of the professors. I was very particular in what I was seeking. Pepperdine met the mark. I've grown a great deal intellectually; this naturally has had a demonstrable impact as far as my confidence and expectations are concerned, both have been augmented in a very meaningful way. I'm incredibly grateful to say the least.

Tell us about your summer fellowship at Hoover. What are your responsibilities and how did you choose this particular opportunity?

The two primary functions of Hoover's Washington DC, extension are policy research and outreach. I help with both. I've assisted their full-time and Visiting Scholars with research and I also assist with some of Hoover's outreach efforts, which focus on promoting the scholarship of their fellows throughout the policy making arena.

I've actually wanted to work at Hoover for years. My morning runs in Santa Monica were always accompanied by Milton Friedman lectures and interviews from their show "Uncommon Knowledge." I've read the work of many of their scholars and I admire this place and the culture that it's fostered immensely. We're living hyper-politicized times, so its important that we maintain policy making institutions centered on genuine truth seeking and problem solving. So many think tanks have become compromised by political attachments and funding interests, which is not surprising, but nevertheless disheartening. When that happens the integrity of the product obviously suffers. Hoover has done a remarkable job in maintaining quality scholarship over the years and insulating themselves from the more pernicious effects of external pressures. I already feel as though I've been exposed to so much. Like most opportunities though, finding the right place is one thing, but making the most of it is another. You get out what you put in.

What are your long-term career goals? What is the most important way the School of Public Policy is helping to prepare you?

I hope to pursue a PhD after earning my masters. SPP has been an excellent start to what I hope is a long and fruitful career in research, writing, and advocacy. My research interests are in political theory, history, foreign policy, and security. These areas of study are clearly varied, but I've done fairly well in discerning where they can overlap, so I'll go from there to find an institution that fits. I haven't chosen a program at this point. I'm going to be getting married fairly soon, so there are two lives and careers that I need to take into consideration when selecting schools. Either way, I care deeply about my pursuits so I have no doubt that things will fall into place.
Ultimately, I hope to research intellectual, historical, and cultural developments in the West. In the policy making field, analysis and formulation should always be informed by history and an understanding of the theoretical precepts that underlie the current paradigm. This always seemed rather intuitive to me, but this isn't the standard approach of many policymakers. Rather than look to the wisdom and lessons that can be gleaned from experience, many in the policy world hold the belief that they can manufacture sound policy from scratch by use of cold data and reason alone. This approach is jejune at best and can lead to disastrous consequences. Those who formed the Pepperdine curriculum understood the need to give students the proper foundations at the outset. Here, you're forced to question assumptions that are usually taken for granted in other institutions.

What do you think is the biggest policy challenge currently facing California and/or the United States? What can be done about it?

California faces a myriad of policy challenges that it will have to confront in the years to come. It all really just boils down to fiscal policy, the regulatory environment, and demographics. Recent studies show that the state holds roughly $1 trillion dollars in unfunded liabilities for pension and debt obligations. Compound this with burdensome taxation, one of the worst regulatory environments for business in the country, and major demographic changes in the tax base and you've got a system that is virtually unsustainable. Prudent and painful change from multiple angles will need to take place, but given the voting patterns of just the past 30 years I'm not optimistic that the political "powers that be" are capable or willing to engage in the type of introspection that's needed to get things moving.

On the federal level I would say that our approach to national security and mitigating the threat of terror is abysmally flawed. I recently attended a hearing at the Senate Committee on Homeland Security and Governmental Affairs and Michael Leiter, the former director of the US National Counterterrorism Center testified. He made a number of admissions that only validated my views that many security agencies in the United States are ill-equipped on a political and cultural level to confront the rise of Islamic radicalism in the West and the Middle East. With over $3 trillion dollars expended and thousands of lives lost, our security agencies need to start insulating themselves from political considerations. Moving forward they will have to identify and collaborate with Muslim reformers and meaningfully challenge those extremist elements that have been exploiting western liberal institutions for their own benefit and maintenance. Attendant to this is the need to confront those state actors and NGOs that succor Islamist organizations.