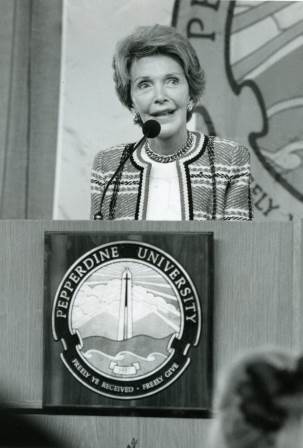 It is with great sadness that the nation learned yesterday of former First Lady Nancy Reagan's passing at the age of 94. The flags around the Malibu, California, campus fly at half-staff.

The news could only trigger positive memories of a woman who led a life of influential public service with grace and dedication. The Pepperdine School of Public Policy remembers a friend who played an important role in the early years of the program.

In 1999, working with her longtime friend Flora Thornton, the former First Lady helped to establish the School's first endowed professorship-the Ronald Reagan Professor of Public Policy, and was integrally involved in the selection of famed political scientist, James Q. Wilson, to serve in that position for over a dozen years. Mrs. Reagan was also a regular attendee of the School's annual Reagan Forum lectures delivered at the Reagan Presidential Library in Simi Valley, California.

As the School of Public Policy's Dean Emeritus James R. Wilburn, who worked with Mrs. Reagan on several initiatives remembers, "The Reagan's were great friends of Pepperdine going back to the 1960s, so when we launched the graduate policy program in 1997, it was a delight to work with her on a number of projects that continue to this day exploring President Reagan's indelible impact on public affairs."

Pepperdine's current Ronald Reagan Professor of Public Policy and respected Reagan biographer, Dr. Steven F. Hayward notes, "The closeness of the bond between Ronald and Nancy Reagan means we will probably never know the full extent of her influence on President Reagan's success in life and in office, but that it was absolutely essential to this remarkable story in our history is undeniable."

Interim Dean Pete Peterson added, "Through her great work at the Presidential Library and other programs, Mrs. Reagan not only preserved, but broadened our understanding of President Reagan's legacy of freedom and ordered liberty. We have been honored to work with her over the years in this mission, and will continue with others to carry this torch forward into the years ahead."