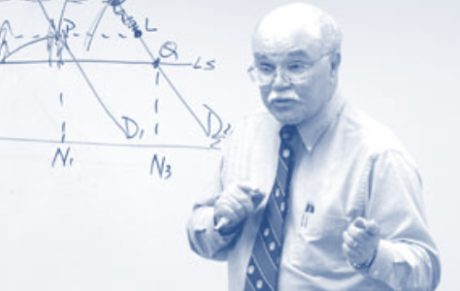 The Pepperdine School of Public Policy (SPP) community mourns the passing of the School’s founding faculty member, Charles Van Eaton, who died on Monday, July 20, 2015, in Chattanooga, Tennessee, after a battle with a long illness.

He will be fondly remembered for his compassion and care for students not just in his teaching, but outside the classroom. Van Eaton was still well connected with many of his former Pepperdine students far beyond the years that he taught in Malibu.

Van Eaton came to Pepperdine in 1998 and led the School’s economic specialization by teaching core courses in economic analysis and elective courses in labor economics, public finance and public choice, urban and regional economics, privatization, and health care.  Prior to Pepperdine, he was the Evert McCabe/UPS Professor of Economics at Hillsdale College from 1978-1998, where he also chaired the Department of Economics.

“Only a few days before Professor Van Eaton’s death, he shared with me ideas that he felt would enrich his core course in economics, gave me a detailed history of Chattanooga, and assured me that he saw this experience as a transition from an earthly life to something even more glorious,” noted Dean James R. Wilburn. “In the School of Public Policy we will attempt to live up to his high standards, for in a world filled with calculation, he was refreshingly without guile.”

Van Eaton retired from Pepperdine in July 2004, relocating to Hixon, Texas, to spend more time with his family. He spent four years as a distinguished professor at large and director of the Bryan Center for Critical Thought and Practice at Bryan College, where he developed a new course on science and public interest.

Among thousands of authored op-eds and articles, Van Eaton regularly wrote for the Sunday Times Free Press, was a contributor to Faith and Public Policy (Lexington Books, 2002), and was also widely recognized in regional and national media.

A memorial service will be held on Saturday, August 1, 2015, at the Central Church of Christ in Chattanooga, Tennessee, at 11 a.m. Prior to his passing Van Eaton requested that if his friends and family desire to send a memorial, that donations be made in his name to either: