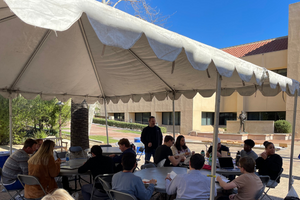 On Thursday, January 27th, the Davenport Institute for Public Engagement and Civic Leadership at the Pepperdine School of Public Policy (SPP) hosted their first Davenport Discussion series event of the semester featuring the founder of Human Future and former Chief Information Officer (CIO) of the city of Palo Alto, ​​Dr. Jonathan Reichental. SPP students attended the lunch discussion to learn about the role of data in public policy and “smart cities.”

With a successful job in the private sector, Reichental never would have believed he would work in the public sector. However, that changed when he received a call to serve as the CIO of Palo Alto, in the heart of Silicon Valley. Initially, he said he was reluctant to take the offer but still he pursued the conversation. That follow-up conversation changed his career forever. Through this, Reichental emphasized to students the need to always consider every opportunity and not be too cavalier. An openness to conversation and a willingness to consider all opportunities is a key part of the job-hunting process.

Reichental's work in public service was a watershed moment in his view of data and technology. He saw that the information which was taken for granted in the private sector was completely foreign to his colleagues in city hall. He introduced data analysis and technology into the Palo Alto government and revolutionized the public services of the city. This inspired Reichental's vision of smart cities, which are cities with leaders who listen carefully to data scientists and analysts and are willing to take risks when necessary to better serve their citizens. Many of these leaders are taught by Reichental through the Davenport Institute’s Professional Certificate in Leading Smart Communities.

In the discussion that followed, Reichental shared his knowledge that the trend of smart cities is not only in the US, but is a global phenomenon, especially in the developing world. His message of innovation resonated well with SPP's focus on innovation and leadership.