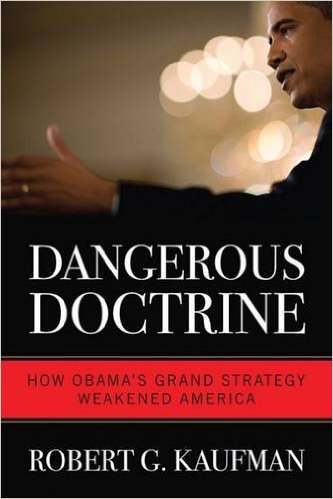 Robert Kaufman, the Robert and Kathryn Dockson Professor of Public Policy, has released his latest book, Dangerous Doctrine: How Obama's Grand Strategy Weakened America (The University of Kentucky Press, May 2016).

Much like Margaret Thatcher and Ronald Reagan, President Barack Obama came to office as a politician who emphasized conviction rather than consensus. During his 2008 presidential campaign, he pledged to transform the role of the United States abroad. His ambitious foreign policy goals included a global climate treaty, the peaceful withdrawal of American military forces from Iraq and Afghanistan, and a new relationship with Iran. Throughout Obama's tenure, pundits and scholars have offered competing interpretations of his "grand strategy," while others have maintained that his policies were incoherent or, at best, ad hoc.

In Dangerous Doctrine, political scientist Robert G. Kaufman argues that the forty-fourth president has indeed articulated a clear, consistent national security policy and has pursued it with remarkable fidelity. Yet Kaufman contends that President Obama has imprudently abandoned the muscular internationalism that has marked US foreign policy since the end of World War II. Drawing on international relations theory and American diplomatic history, Kaufman presents a robust critique of the Obama doctrine as he situates the president's use of power within the traditions of American strategic practice.

Focusing on the pivotal regions of Europe, the Middle East, and Asia, this provocative study demonstrates how current executive branch leadership threatens America's role as a superpower, weakening its ability to spread democracy and counter threats to geopolitical order in increasingly unstable times. Kaufman proposes a return to the grand strategy of moral democratic realism, as practiced by presidents such as Harry S. Truman, Ronald Reagan, and George W. Bush, with the hope of reestablishing the United States as the world's dominant power.

Kaufman is a political scientist specializing in American foreign policy, national security, international relations, and various aspects of American politics. He has written frequently for scholarly journals and popular publications, including The Weekly Standard, Policy Review, the Washington Times, the Baltimore Sun, the Philadelphia Inquirer, and the Seattle Post-Intelligencer. He is the author of three other books, including In Defense of the Bush Doctrine; a biography, Henry M. Jackson: A Life in Politics, which received the Emil and Katherine Sick Award for the best book on the history of the Pacific Northwest; and Arms Control During the Pre-Nuclear Era. Kaufman also assisted President Richard M. Nixon in the research and writing of Nixon’s final book, Beyond Peace. He is a former Bradley Scholar and current adjunct scholar at the Heritage Foundation, and has taught at Colgate University, the U.S. Naval War College, and the University of Vermont. Kaufman received a JD from Georgetown University Law Center and his BA, MA, MPhil, and PhD from Columbia University. Kaufman will receive an LLM in dispute resolution from the Straus Institute at the Pepperdine University School of Law in May 2016.

LISTEN: Kaufman talks with Steven Hayward from the Power Line Podcast on the Ricochet Radio Network about what the next administration needs to do to repair foreign policy.