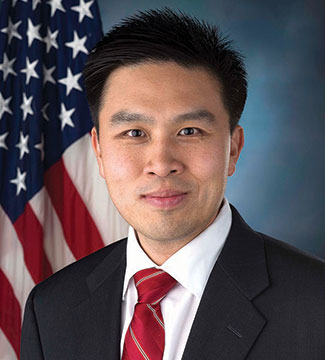 Dr. Lanhee J. Chen is the David and Diane Steffy Research Fellow at the Hoover Institution; director of domestic policy studies and lecturer in the public policy program at Stanford University; and an affiliate of Stanford's Freeman Spogli Institute for International Studies.

He is also a counsel at the law firm of Arent Fox LLP. Chen was an adviser to Senator Marco Rubio's 2016 presidential campaign, the policy director for the Romney-Ryan presidential campaign, chief policy adviser and senior strategist for Governor Mitt Romney's campaign, senior adviser on Policy to the National Republican Senatorial Committee, and served as director or manager of numerous other campaigns.

Chen was honored in 2015 as one of the POLITICO 50, a list of the "thinkers, doers, and visionaries transforming American politics." His writings have appeared in The Wall Street Journal, the Los Angeles Times, and Bloomberg View and he has been a CNN political commentator and member of the editorial board of the Salem Media Group.

At Stanford, Chen serves as a member of the Faculty Steering Committee at the Haas Center for Public Service. He has also been lecturer in law at Stanford Law School and is an eight-time winner of Harvard University's Certificate of Distinction in Teaching.

Chen is the founder and president of Launch Policy Strategies, a strategic consulting company and is a member of both the International Advisory Council and the Health Advisory Board at APCO Worldwide, an international public affairs and communications firm. Chen also serves in a variety of leadership roles in nonprofits and community-based organizations. He is a director of El Camino Hospital in the Silicon Valley, serves on the Board of Trustees of the Junior Statesmen Foundation and is on the Advisory Board of the Partnership for the Future of Medicare. Chen was recently elected to membership in the Committee of 100, an organization of prominent Chinese Americans.