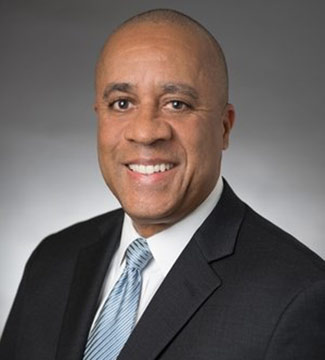 James G. Featherstone is executive director at the Homeland Security Advisory Council (HSAC) at the Pepperdine School of Public Policy. Featherstone served as President and CEO of the Los Angeles Homeland Security Advisory Council after serving the City of Los Angeles for thirty years. At HSAC, Featherstone continues to strengthen the Greater Los Angeles region's crisis readiness and resilience by convening and connecting the private, public, and civic sectors through collaborative partnerships and strategic alliances, emerging technology, and research. A native of Washington, DC, and a veteran of the United States Navy, Featherstone began his public service to the City of Los Angeles in 1986 with the Los Angeles Fire Department, and was later appointed Interim Fire Chief (2013-2014). In 2007, he was appointed General Manager of the Los Angeles Emergency Management Department, where he led a successful departmental reorganization and restructured the City's emergency management protocols and processes. Featherstone holds a master's degree in leadership from the University of Southern California, a bachelor's degree in public administration from Union Institute and University, and is an alumnus of the Executive Leaders Program at the Naval Postgraduate School's Center for Homeland Defense and Security. He is a Senior Fellow in the Harvard University Kennedy School of Government's Program on Crisis Leadership. Featherstone is the current Chair of the National Advisory Council for the Federal Emergency Management Agency (FEMA).