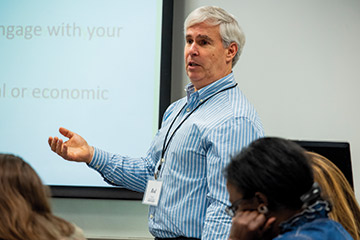 Each semester at the Pepperdine School of Public Policy, the Davenport Institute hosts a series of lunchtime Davenport Discussions with practitioners, journalists, innovators, and researchers who speak to students on a wide range of issues from state and local finance to the use of technology in government to the outlook for cities in a state budget crisis and much more. These interactive sessions give students an opportunity not only to hear from experts in the field but to ask questions and make personal connections as well.

Sandy Smith
Land Use Consultant, Sespe Consulting
"Why is Housing So Hard?"

Kevin Lyons
Co-Founder and Chief Scientist, Governance Science Group
"How Good People Can Give You Bad Data: The Science of Structuring Community Input"

Lance Simmens
Columnist
"From DC to Malibu: An Activist's Life Inside/ Outside Government"

Dr. Neil MacKinnon
Dean and Professor,James L Winkle College of Pharmacy, University of Cincinnati, Cincinnati, OH
"International Health Policy: How the US Compares to Other Developed Nations and Future Directions"

David Campt
Author, "Read the Room for Real"
"How Much Civic Engagement do We Really Want?"

Luke Thompson
Special Adviser and Chief Empiricist at Right to Rise USA
"Lawyers, Ads, and Money: How Campaigns Raise and Spend Money in the Pursuit of Victory"

Michael Walsh
Journalist, Author, Screenwriter
"The Devil's Pleasure Palace: The Cult of Critical Theory and the Subversion of the West"

Vance Hickin
California Digital Director, Obama for America
"How they Did it: Obama's 2012 Online Campaign"

James Prieger
Associate Professor of Public Policy, Pepperdine School of Public Policy
with
Victor Abalos
Director of Communication, California Forward
"California's Civic Engagement: Why We Lag and How We Can Improve"

Vance Hicken
Manager, California Forward
"Us Now: A film project about the power of mass collaboration, government and the internet"

Kay Hymowitz
William E. Simon Fellow, Manhattan Institute
"Manning Up: How the Rise of Women has Turned Men into Boys"